This month, two new wearable activity trackers were announced. Fitbit announced their second version of a wrist-worn device called the Fitbit Force and Nike announced their updated Nike+ FuelBand SE. Essentially, these companies have updated their products to include features that are now commonly found on most wearable activity trackers. You can wear these wristbands as watches since they display time. You can also push buttons and track your sleep quality.

Both of these devices are rated as "water resistant," but not really waterproof for swimming. Right now, if you want to wear an activity tracker as you swim, you'll want to get the Misfit Shine or the Polar Loop. These are rated to be waterprooof for swimming. 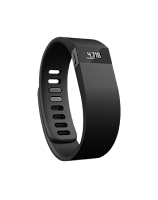 The Fitbit Force is wider than the Fitbit Flex and includes a digital display where you can see your steps, the time, etc. The display upgrade makes the Force functional as a watch. Like the Fitbit One, the Fitbit Force includes an altimeter that measures your vertical movement when you go up stairs. Of course, if you're using a stair-climbing machine in the gym, you're not actually moving up, so your activity tracker won't know that you're burning more calories. Fitbit Force syncs with newer iOS or Android devices using Bluetooth 4.0. Priced at $129.95. 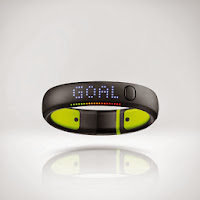 The Nike+ FuelBand SE is almost identical to the original FuelBand except that it now comes in a few different color accents and you can track specific activities by pushing the button on the device. You can also track sleep. The FuelBand also reminds you to move if you've been too sedentary for an extended period of time. Some of us really need that type of reminding, especially if we sit at a desk all day. FuelBand only syncs with newer iOS devices using Bluetooth 4.0. Priced at $149.

If you've never tried using an activity tracker, you may wan to think about buying a used one on eBay. I suspect that we'll see some Fitbit Flex and Nike+ FuelBand users who want to sell their 1st generation gadget to buy the newest model.

It's amazing to see how the wearable device industry has exploded. Later this fall, we will probably see additional smartwatches and wearable gadgets introduced before the holidays. People will get energized about the idea of wearing a device that will help them stay motivated to exercise and be more self-conscious about their level of physical activity. That's a good thing. Our society has become way too sedentary and inactive. Get up every 30 minutes to take a stretch break or walk around the room. Do you need an app to remind you to do that?
Posted by DrJosephKim at 10:00 PM