So I've been using my Fitbit Classic since 2011. This item is truly a "vintage" wearable activity tracker. But, since it still works, I continue to wear it to see when it will stop tracking my steps.

My Fitbit Classic from 2011 is running Firmware version 27. Sorry, but no Easter Egg hidden in my Fitbit Classic that will allow it to provide wireless Mobile Sync. I don't think any gadgets had Bluetooth 4.0 back in 2011.

Today, my Fitbit app on my iPhone 5 displayed an exclamation point next to my Classic tracker, so I clicked on it and found the following message: 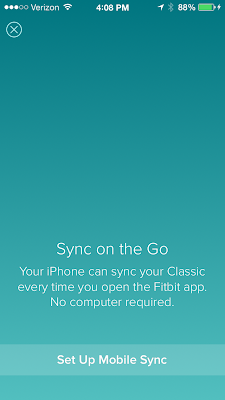 Really? My iPhone can sync my Classic? No computer required? Mobile Sync? Even though my Classic doesn't have Bluetooth? Or, does it?

The Fitbit app for iOS was updated to Version 2.1 and this update allows iPhone 5S users to tap into that M7 motion coprocessor. The udpate also notified me that my 2011 Fitbit Classic was capable of wireless mobile sync. So, I clicked on "Set Up Mobile Sync" to see what would happen. As I expected, it failed. I don't believe that the Classic has the proper wireless hardware for this type of wireless sync. It doesn't have Bluetooth 4.0 (Bluetooth Smart or Bluetooth Low Energy/BLE). I don't think Bluetooth 4.0 even existed back then.

For those who have an iPhone 5S, the updated Fitbit mobile app for iOS apparently will now allow you to use your iPhone as an activity tracker/pedometer as long as you've got the phone on your body all the time. So, if you carry your iPhone 5S with you all the time, this could be a different way for you to track your physical activity. You can now choose between the Fitbit app or the Nike+ Move app. I'm sure we'll be seeing more apps that are designed to leverage the M5 Motion Coprocessor found on the newest iPhone 5S. But, then what would we wear on our wrists?

My iPhone sits around at my desk and I don't carry my iPhone when I'm exercising at the gym. It's just not practical for me to use my iPhone as a wearable activity tracker.
Posted by DrJosephKim at 6:00 AM