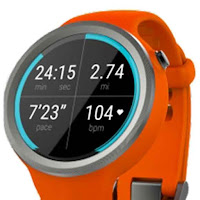 The Moto 360 Sport is one of the newest Android Wear smartwatches that's been announced recently. Unlike the 2nd generation Moto 360, the Sport version includes built-in GPS and uses the Motorola AnyLight hybrid screen display so that you can easily read the screen in bright sunlight. I support Motorola's decision to include an ambient light sensor at the expense of the "flat tire" look on the screen. I'm a big believe of function over form (and some may disagree). In order for smartwatches to be compelling, they must offer meaningful functionality, even if they compromise a bit on looks.

I'm eager to see how this Sport smartwatch performs when it's released later this year. It could really be a winner if it offers robust battery life and decent water resistance (hopefully it's better than IP67, but we'll have to wait and see).
Posted by DrJosephKim at 8:00 PM