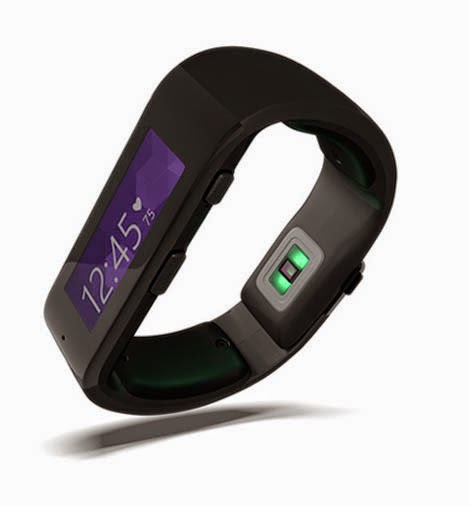 The Microsoft Band does not appear to be waterproof for swimming. On their website, Microsoft describes it as "Dust- and splash-resistant." I'm not entirely sure what that means, but I'm pretty sure that means that you shouldn't swim with this (so don't expect Triathletes to be sporting the Microsoft Band).

The Microsoft Band also has a battery life of 48 hrs, but we don't know how that translates into "real-world" use. If you're running 13.1 or 26.2 miles with the GPS on, will it last through the race? I'm definitely intrigued, but I'm just not sure if the dual 100 mAh batteries will give this enough juice to meet the demands of serious athletes. On one hand, the Microsoft Band has all the bells and whistles to entice serious competitive athletes, but will the lack of robust water resistance or battery life be a deal killer?

The Microsoft Band is priced at $200.

The Basis Peak might be a better choice of a wearable activity tracker that also has a built-in optical heart rate monitor. Also priced at $200, the Basis Peak has longer battery life (4 days) and is water resistant to 5 ATM. However, the Basis Peak lacks a built-in GPS and you won't get a color screen or a UV monitor.

If you can wait until early 2015, the newly announced Fitbit Surge will sell for $250 and is another wearable activity tracker that has optical heart rate monitoring, built-in GPS, is water resistant to 5 ATM, and battery life of 7+ days. However, you won't get a color screen or a UV monitor.

Posted by DrJosephKim at 8:00 PM